Personal explorations in price discrimination - 'that's how they getcha!' 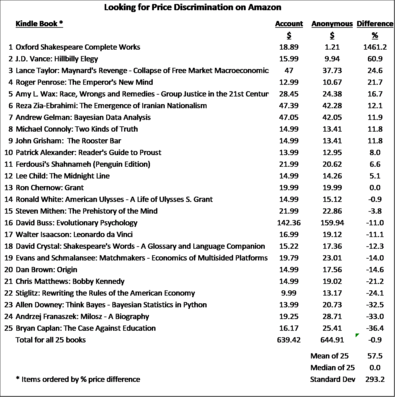 The other day I had a post on the growing ability of online businesses to charge customers different prices according to their ability to pay – perfect price discrimination in economists’ jargon.  Which led naturally to the question: am I being screwed, and, if so, how badly?

Here are the results of a small experiment on Amazon. I compared 25 Kindle e-book prices on my Amazon account with those on the Amazon website accessed using an anonymous browser.  The sample (see table) is not strictly random. These are books that appeal to a dilettante dabbler like me, plus a sprinkling of New York Times best-sellers.

My prior expectation was that, if Amazon were practicing perfect price discrimination, there would be big, systematic differences between the two sets of prices. If the company sized me up as relatively wealthy (or poor), the prices on my account would be higher (or lower) than in the anonymous set.

The results were surprising. The price differences are big – but not systematic.

There’s no disputing Amazon charges different customers different prices.  For only one book – Ron Chernow’s ‘Grant’ – was the price on my account the same as the ‘anonymous’ price.  And the differences are large: the median absolute price difference – i.e., ignoring if the difference was positive or negative  – was around 12%.

The baffling part, though, is that, compared to the ‘anonymous’ prices, there are as many instances of under as overcharging – 12 each way. The median actual price difference was precisely 0%.  Viewed another way, it would have cost slightly less - $639.42 - to buy all 25 books on my account compared to the $644.91 sum of anonymous prices.

So what is Amazon’s pricing strategy here? I’m eyeballing the table for patterns, but blowed if I can tell.

And I do still fret about that huge 1461% overcharge on the Oxford Complete Works of Shakespeare.  They’re happy to flog it for $1.21 on the anonymous page, but from me, they want $18.89! With 20 years of data, I guess they know to a fine point what this customer would be willing to pay.